Where do you find Seattle Waterfront Homes?

Typically most home buyers looking for Seattle waterfront homes are envisioning either Lake Washington or Puget Sound properties.  Nonetheless, there are other waterfront options within the Seattle city limits.  For example, there are tons of houseboats and a limited amount of homes on Portage Bay and Lake Union.  In North Seattle, the smaller Bitter Lake and Haller Lake have waterfront properties.  Also there are some small creeks in Seattle like Thornton Creek in Northeast Seattle and Longfellow Creek in Delridge/West Seattle that have homes along them. 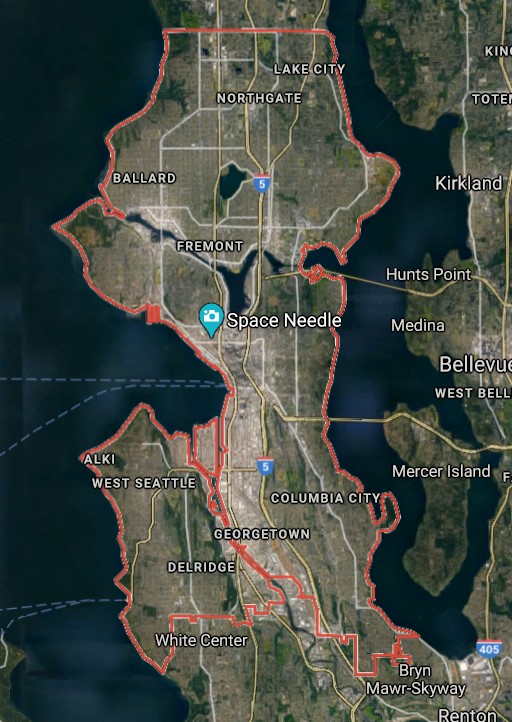 Puget Sound to the West & Lake Washington to the East

Seattle is a long narrow city surrounded by water; thus there is plenty of shoreline.  Seattle’s geography has 147.52 miles of freshwater shoreline and 53.38 miles of saltwater shoreline. Nevertheless, Seattle waterfront homes are extremely rare.

Public Parks and Beaches Line Many of the Waterways

For one, public parks and beaches make the waterfront accessible for everyone in Seattle to enjoy.  For example, Green Lake (seen below) is a popular lake in North Seattle for running, biking, swimming, and other activities and it is completed surrounded by parks and has no waterfront homes. 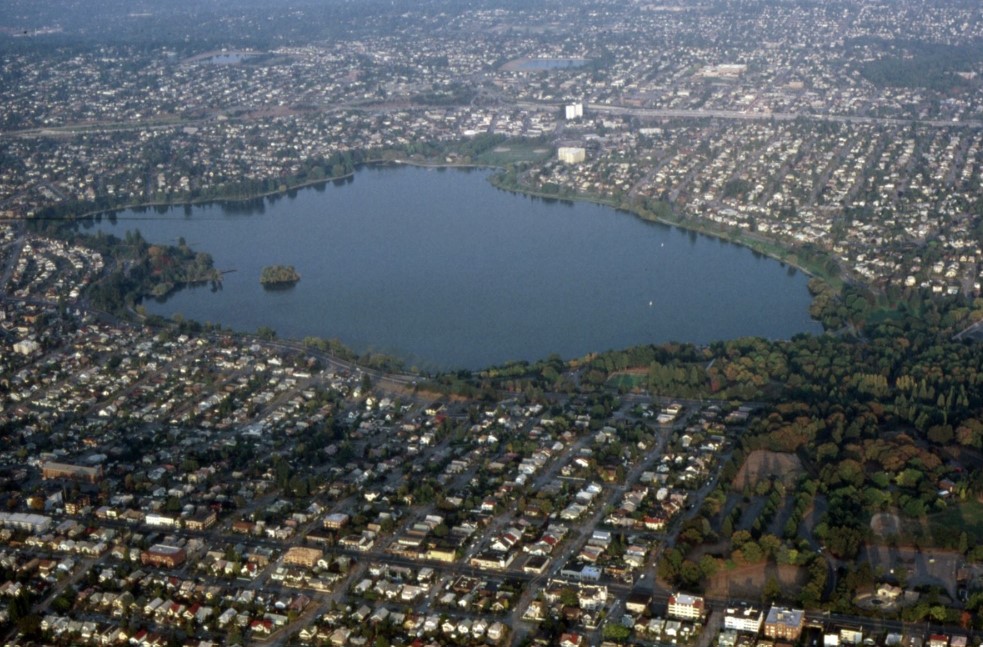 Green Lake is surrounded by parks

Another example of Seattle parks is along the shores of Lake Washington between Mt Baker neighborhood and Seward Park.  There is nearly 3.5 miles of shoreline where there is the public Lake Washington Blvd Trail and no waterfront homes. 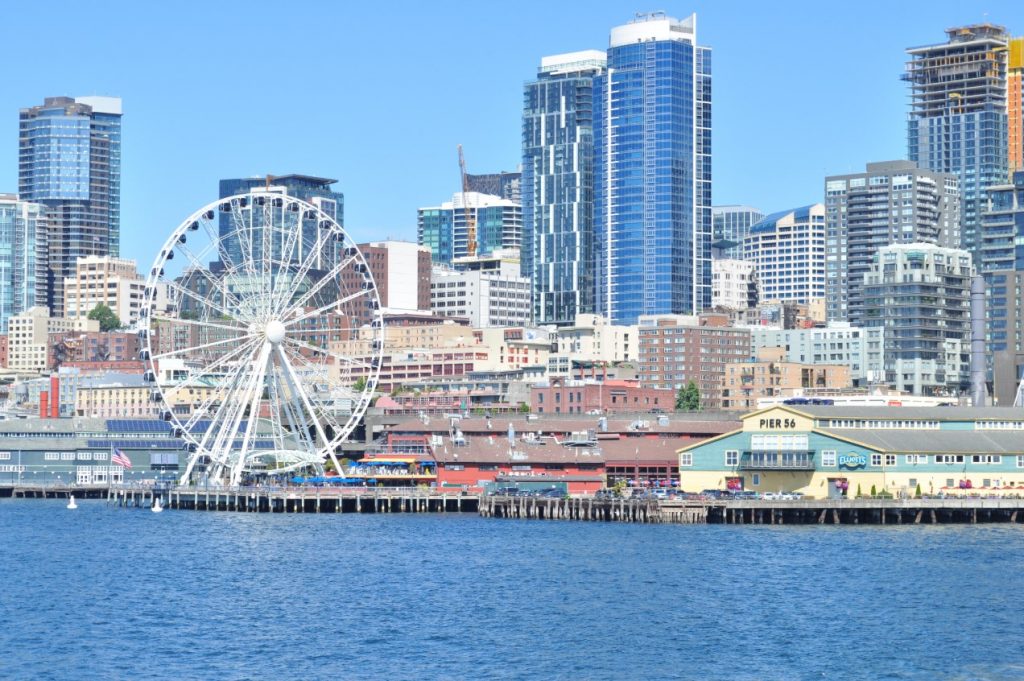 The Duwamish Waterway/River which flows into Elliot Bay from the south is mainly lined with commercial properties. 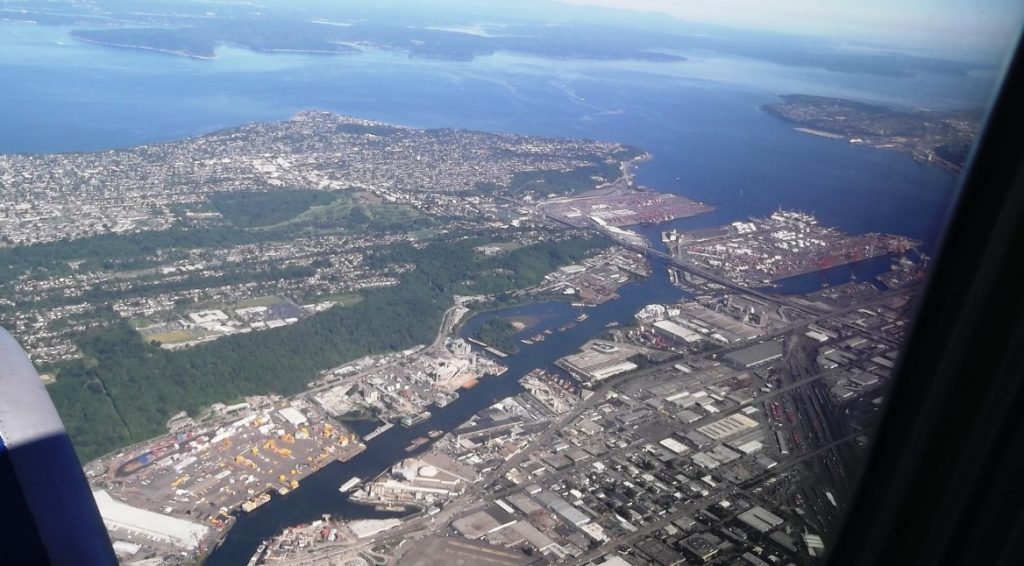 Running through the middle of Seattle is the Lake Washington Ship Canal which connects Lake Washington and Puget Sound.  The canal was began in 1911 and completed in 1934.  The 3 mile section (6 miles of shoreline when including both sides) between the Ballard Locks and Lake Union is nearly all commercial property.

Lake Washington Ship Canal between Lake Union and the Sound

A third reason is the railroad right of way.  Burlington Northern Santa Fe Railway owns the railway that winds through Seattle, but just north of Golden Gardens Park in North Seattle the railway runs along the Puget Sound up through Everett 30+ miles north of Seattle.  With limited exceptions there are no waterfront homes in that span. 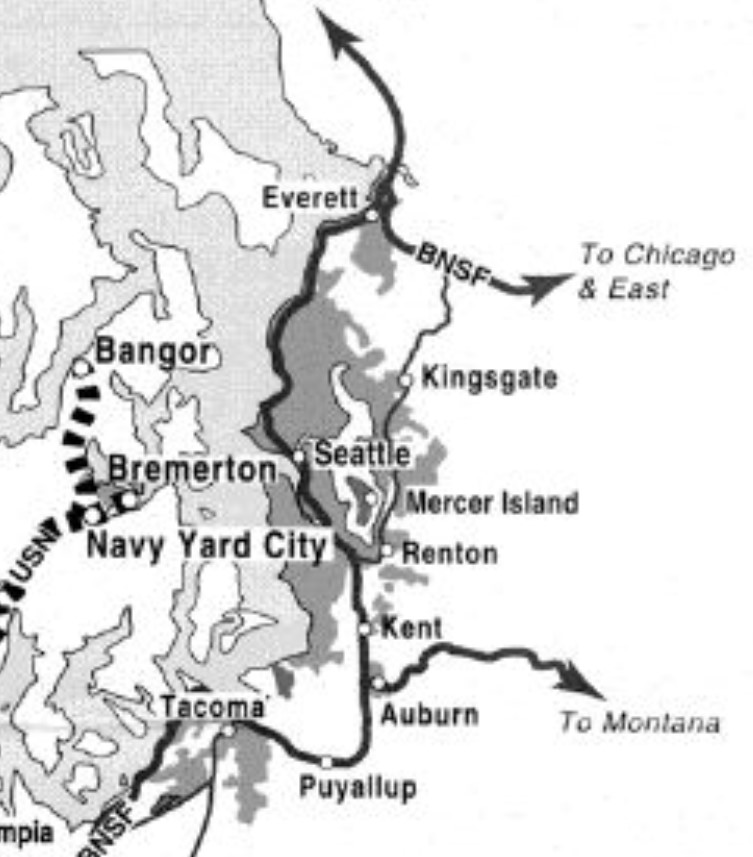 Railroad runs along Puget Sound from North Seattle to Everett

Both the Puget Sound and Lake Washington run the length of Seattle (and beyond).  Thus, the Puget Sound is Seattle’s west border and Lake Washington is Seattle’s east border.  Each are easily Seattle’s largest body of water and also the most sought after for waterfront homes.  Although the two bodies of water are less than 2.5 miles apart in the middle of the city, they are both very different.  When comparing the two, there are many things to consider. 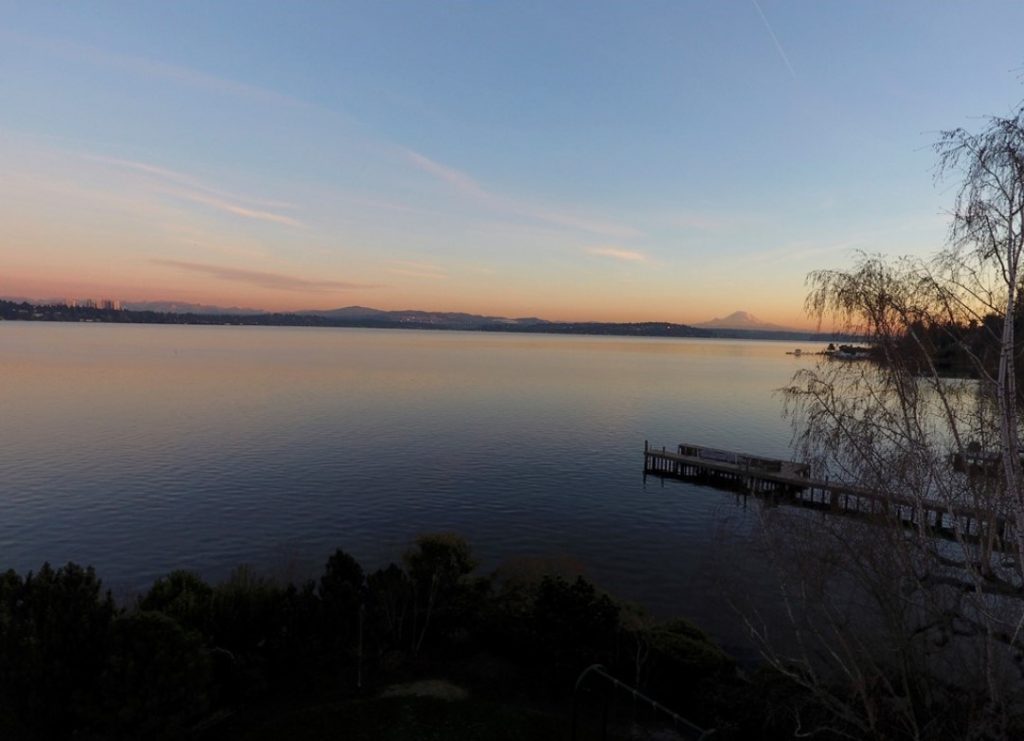 Maintaining your Seattle waterfront home commonly takes more diligence than a non-waterfront home.  Waterfront properties usually have more direct contact with the elements.  There are no trees, hills, or neighboring homes to block the sun and wind that come off the water.  Such elements can be hard on your home including paint, wood siding, etc.  In addition, Seattle waterfront homes are enjoyed by you and your guest; thus, outdoor elements tend to be brought into your house more often than other homes.  Humans are not the only ones who enjoy the water.  While pests like rodents and bugs/spiders can be an issue in all Seattle homes, Seattle waterfront homes need extra care to combat pests.  Humidity in the home can also be an issue, especially in the summer, so while not necessarily a huge issue, it should be paid attention to.

While all these issues affect both Puget Sound and Lake Washington waterfront homes, the salt water from the Puget Sound is especially damaging to waterfront properties.  Corrosion especially on metal door handles, railings, hinges, locks, etc. is an issue that must be paid attention to.


Boating on the Sound vs the Lake

Just as the below section “Do you like to Swim?” suggests, the water is warmer in Lake Washington during the summer.  Thus, boaters and their friends tend to prefer water skiing, tubing, wakesurfing, etc. on Lake Washington.  Puget Sound really cannot compete with Lake Washington when it comes to these water activities.

Lake Washington has restaurants you can visit in such neighborhoods as Leschi and cities like Kirkland.  Boaters on the lake can also anchor with other boats in certain areas such as Andrews Bay by Seward Park.  Nevertheless, these options really do not compare to the Puget Sound where you can boat to marinas in Shilshole/Ballard or Magnolia or visit harbors at different islands of the Puget Sound including the San Juans. 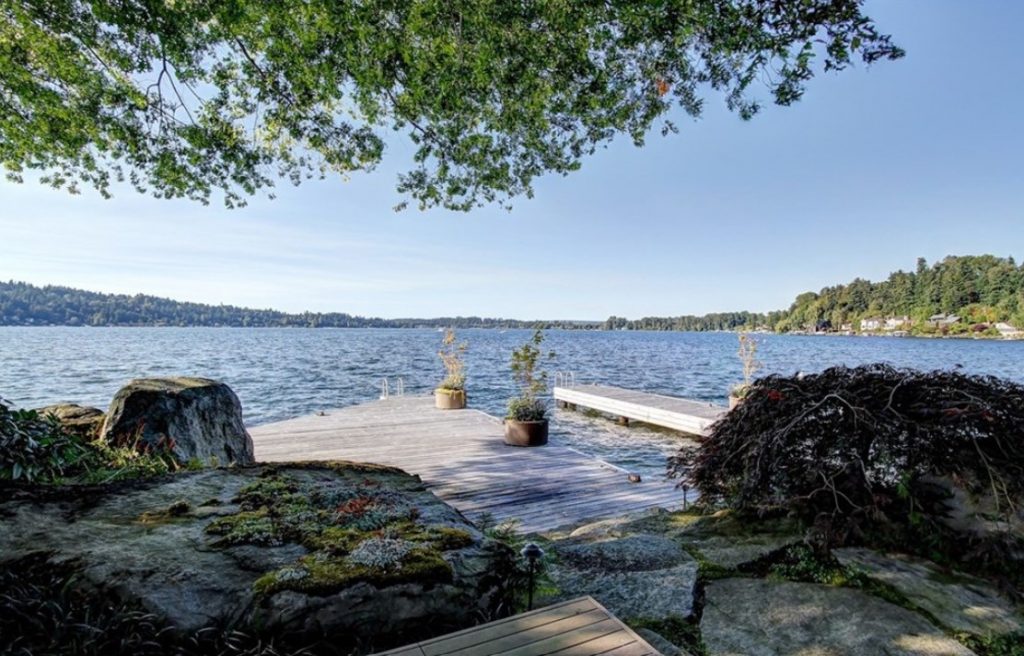 If a home does not have a current dock, it is nearly impossible to add one.  Most homes on Puget Sound do not have a dock, while most homes on Lake Washington do.  Docks are great to take a swim from or to tie your boat for easy access.  If there’s no dock, you can often tie your boat to a buoy permanently anchored in front of your property, but accessing your boat takes an extra step of maneuvering a small boat back and forth from and to the shore.

See “Maintaining your Seattle Waterfront Home” for issues with waterfront structures and the extra work needed to keep your property in good shape.  There is the same issue with docks.

Seattle lies on the west shores of Lake Washington.  With a few exceptions, if you live on Lake Washington in Seattle your waterfront home faces east.  Thus, you will get sunrises in the morning over Kirkland, Bellevue, Mercer Island and the Cascades in the distance.  Conversely, on the Puget Sound you see amazing sunsets as the sun lowers below the Olympic Mountains on the peninsula across the Sound. 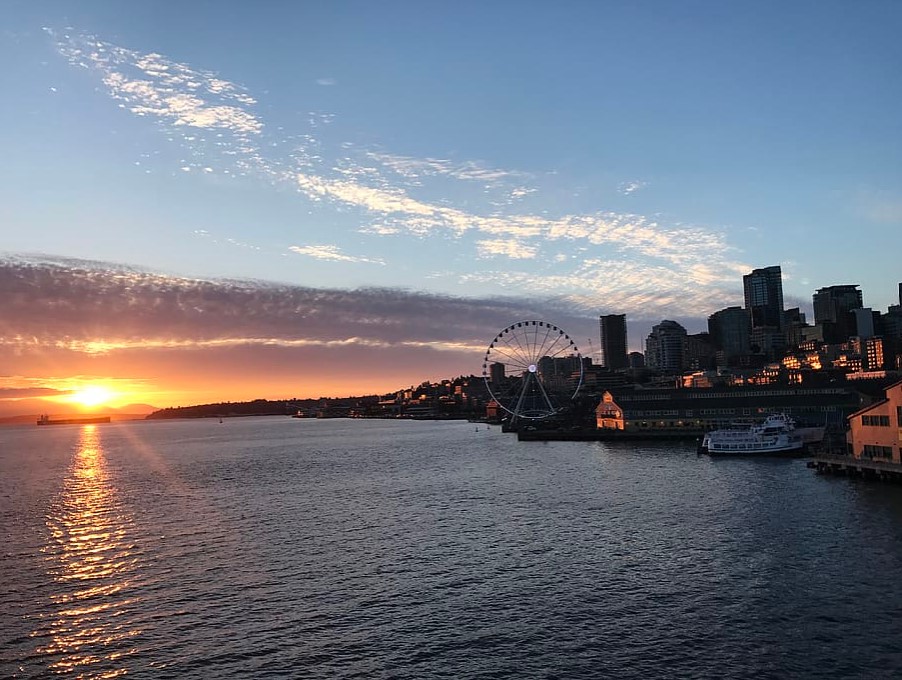 There are exceptions, some Seattle waterfront homes in Laurelhurst face west and get the benefit of seeing sunsets.  On the Puget Sound, there are a few homes in the north end of Magnolia that face east.  In West Seattle, many condos and homes face east, but technically they are not Seattle waterfront homes since Alki Beach and/or commercial properties sit on the shore in front of them.

Access to the shoreline is a tricky issue, but in general homes on Lake Washington have exclusive right to use the land in front of their property while on the Puget Sound it can be more complicated.  Unlike other states that allow nearly unlimited access to shorelines, laws in Washington state protect private property rights of waterfront residents.  For instance, the reason lake homes are more likely to have exclusive use is because their property often extends into the lake.  On the other hand, Puget Sound title generally varies between the property line extending to high tide, low tide, or mean high/low tide (halfway between low and high tide).  Thus, the title on the property will generally give the answer, but even then, there can be other issues.  For example, tribal fishing rights can give some Native Americans access to traditional fishing grounds no matter who owns it.  A good article on this issue,talks about Puget Sound property rights in Island County, which also applies to Seattle waterfront on the Sound.

Lake Washington is open to fishing year round.  The main game fish are Coastal Cutthroat Trout, Largemouth Bass, Smallmouth Bass, Yellow Perch, and Black Crappie.  Chinook, Coho, and Sockeye salmon are also available depending on the amount of returning adults.

Puget Sound is more diverse.  For example, in Puget Sound clams, mussels, and oysters can be harvested although Seattle area is not a good area for this.  Many species of salmon and other fish are found in the Puget Sound including in Seattle waters.   Also, there is a short crabbing season in the Seattle area.

So Where Should You Buy?

So where should you buy?  Well, that is really up to you.  Hopefully, the above points help you narrow it down, but either way, you should speak to a real estate broker who knows the ins and outs of Seattle waterfront real estate.  We will be doing another blog about which Seattle neighborhoods have waterfront properties, but there are many areas to chose from.  For example, West Seattle, Magnolia, and Ballard have waterfront homes on Puget Sound.  Other Seattle neighborhoods such as Windermere, Madison Park, and Leschi have waterfront real estate on Lake Washington.  The good news is Seattle is surrounded by water, so no matter if you own waterfront property or not, you are never too far away from access to our city’s waterways. 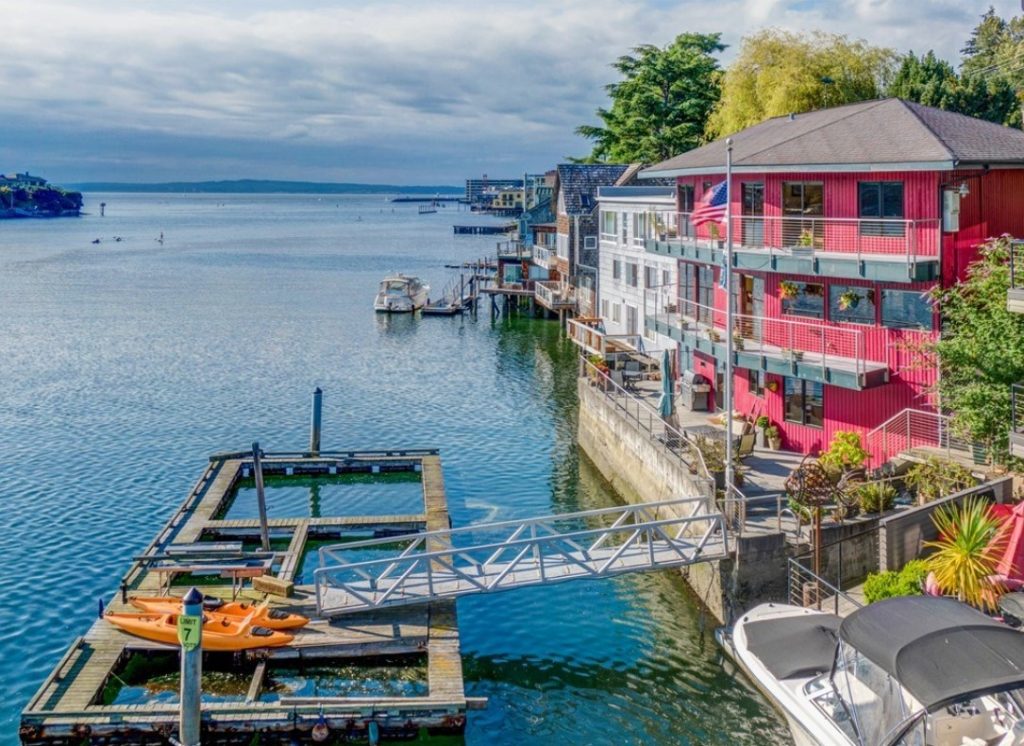 We apologize that it is cumbersome.  Nevertheless, to search waterfront homes, please click on “More” then the blue button that says “Regional Features” then “Greater Seattle Region” and finally under “Property Features” in middle column check “Waterfront”